SURREY, BC — The home sales and new listings for Fraser Valley soared in August, which is quite surprising because it came in the middle of the global pandemic that triggered a massive slowdown in economic activities.

According to the data from the Fraser Valley Real Estate Board (FVREB) Multiple Listing Service®, a total of 2,039 units were sold in August, which represented a 57.2% increase compared to the 1,297 units closed in August 2019.

Furthermore, the sales for August 2020 was 39% better compared to the average rate over the past ten years. The last time the numbers hit record highs was in August 2005.

Interestingly, total home sales for August were down 2.9% compared to the July 2020 figures.

The FVREB is a group of real estate professionals who reside and operate in the British Columbia area, particularly in the Surrey, North Delta, Abbotsford, Mission, Langley, and White Rock.

In a statement, Chris Shields, FVREB President, is optimistic about the market amid the challenges based on the sales volume they noticed month to month. He says that more and more home buyers now recognize the Fraser Valley as a prime destination to build or purchase homes, while “offering more value, as well.”

He is pleasantly surprised that the real estate market in Fraser Valley is bucking the trend where people tend to adopt a wait-and-see attitude in the face of the global pandemic. He adds that despite the “unusual situation,” the Board is “cautiously optimistic” that the numbers could be sustained in the near future.

He said that the Board is “encouraged by the numbers we are seeing.”

In terms of new listings, the FVREB has accommodated 3,309 applications for August, which represented a 40.4% improvement over last year’s figures. Although the new listings were down 6.8% compared to July records, the month proved to be a boon to the Fraser Valley real estate market.

The 3,309 new listings were a marked improvement of 28.9% over the ten-year average for August. In fact, it was the highest recorded increase in the last decade, the group adds.

Nevertheless, August ended with 7,404 active real estate listings, which was a nearly insignificant increase over the inventory in July.  But year-on-year, the active listings represented a 7.9% decline.

Gil attributes the robust market activity to its member realtors, who have taken it upon themselves to be more proactive in educating consumers and providing their expert advice amid the uncertain times. 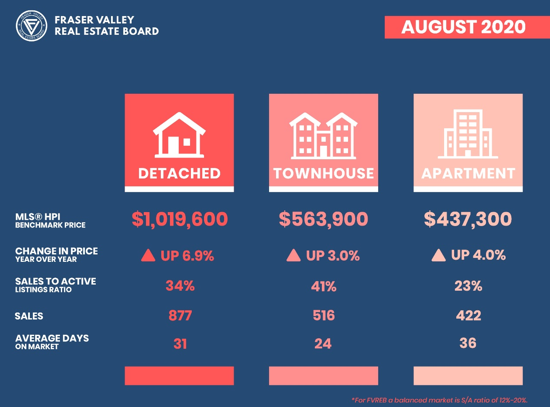