Homes for Sale in Abbotsford BC

Whether you are a young family searching for townhouses or Abbotsford homes for sale, or you are a recent University of the Fraser Valley Graduate looking for 2-bedroom condos in Abbotsford, in order to get started in the Abbotsford Real Estate Market, call or text the Taylor Team at 1-778-316-4290. Abbotsford BC Real Estate is great place to start and our Sutton real estate agents are here to help. Matsqui, Bradner and Sumas Mountain areas of Abbotsford, British Columbia all hold some of the most amazing views of Mount Baker, the Fraser Valley and the Pacific Coast Mountains, making Abbotsford very high in demand. Abbotsford MLS listings show this area as being very active and a good investment for your future.

About The City of

Traditionally, Abbotsford was made up of predominantly farmland and the vast majority of the area surrounding Abbotsford still is. However, Abbotsford BC Real Estate has recently undergone some drastic changes, and new home developments have now incorporated an inspiring combination of modern urban style and friendly country living.

East Abbotsford homes for sale are always in high demand in popular areas like Eagle Mountain, McKee, Whatcom, Auguston, Sandy Hill, Clayburn, and more. Central Abbotsford homes are also growing in demand as young families move into older homes and do their own dream renovation to bring the home up to today’s standards.

Abbotsford homes for sale in areas like Bradner and Sumas Mountain make for a great place to live for people from all walks of life. This area of the Fraser Valley is also an amazing place for those that want to downsize and live a quiet life of retirement, especially those who have recently became empty nesters and would like to move into a rancher style home in Abbotsford. 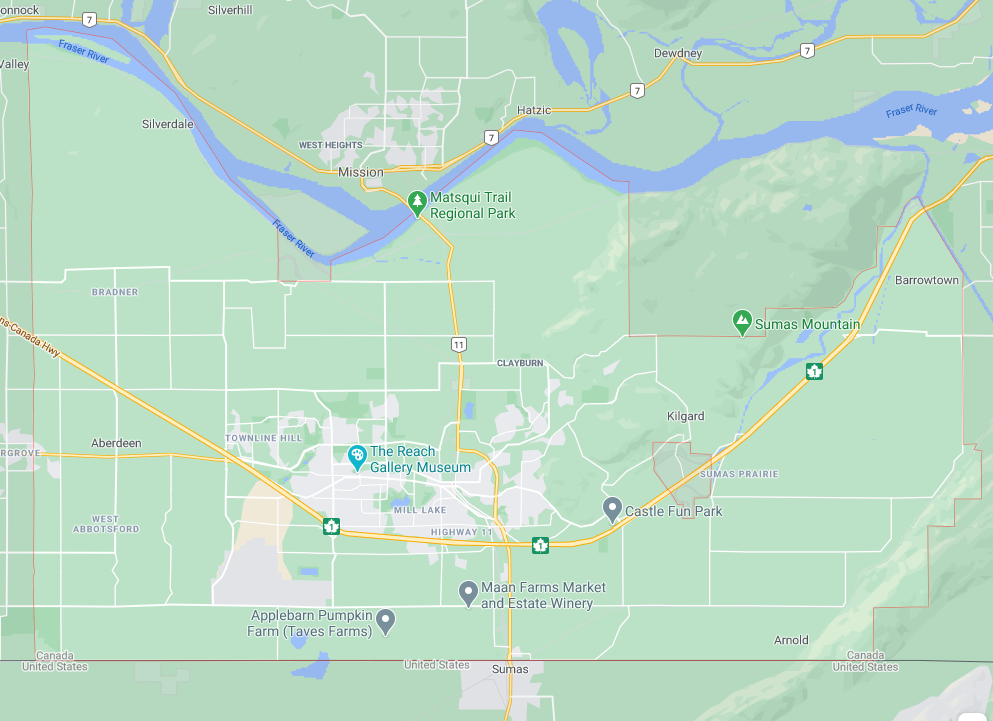 Over the last two decades, the City of Abbotsford has worked in partnership with dozens of park boards, developers, and school districts to further develop Abbotsford into a lively and community-centric city.

The Parks Department of the City of Abbotsford manages several parks, athletic fields, and many recreational and cultural centres that are subsidized through municipal taxes. These programs are developed to ensure that the local residents are engaging in healthy activities and contributing to the cultural growth of the community.

There are over 50 schools in Abbotsford, from private elementary schools all the way to highly-rated public universities (UFV). With so many educational institutions in town, there is a school for everyone!

Local entrepreneurs, developers, and government boards have been working in direct connection with one another to build out the shopping and entertainment districts of Abbotsford.

The City of Abbotsford has been actively improving the transit accessibility of its community. Historically recognized as a car-dependent city, this community has been at the forefront of improving walkability with recent projects surrounding High Street and Montrose.

If you’re thinking about buying a home in Abbotsford, it is important that you consider the economy factors at play and determine whether those trends are inline with a community you want to invest into. Whether you’re a first time homebuyer, long term rental investor, or a family looking to relocate to the Fraser Valley, you should always consider the state of the local economy before purchasing a new property.

As of 2021, the City of Abbotsford has an approximate population of 141,489 people. The population has been growing at a rapid pace of 1.5% per year for well over a decade.

Out of approximately 50,000 households in Abbotsford, the vast majority of families have a household income well between $60,000 to $150,000 or more. While the household incomes are stable, they’re also well above the national median income of $72,000 per year.

Abbotsford’s real estate market continues to steadily rise over the last decade. The FVREB predicts continued growth in real estate prices in all neighbourhoods within Abbotsford.

There are several large economic drivers in Abbotsford that have a significant impact on the local demographics, income, and culture.

Abbotsford, BC is home to the University of the Fraser Valley (UFV), the Tradex building, and the Abbotsford International Airport, which also hosts the annual Abbotsford International Airshow. Abbotsford also has a relatively new state-of-the-art Hospital and Cancer Centre and this growing Fraser Valley community has some of the most sought-after schools in BC. Abbotsford also enjoys a large amount of Commercial Real Estate, making the city completely self-sufficient and ever ready for expansion and growth.

For those who like to save by going across the border to the US to purchase gas, milk, cheese and common household groceries, Abbotsford is ideally located next to the Canada/US Sumas border making it very convenient to save on some additional living costs.

Investor types need to make sure the numbers on the property make sense in order to properly assess the risk-to-reward. While these numbers are rough estimates, they do provide a starting point for real estate investors to gather information and begin the due diligence process.

Before you take the first step in acquiring a real estate investment it is best that you understand the most common costs associated with acquiring and maintaining a rental property.

While the cost of real estate has been steadily rising in Abbotsford for the last several decades, so has the average rents.

Vacancy rates in Abbotsford remained at the lowest levels seen in the last 20+ years. With an average vacancy rate of 0.68% over the last five years.

It is worth mentioning that monthly rents in Abbotsford can vary greatly depending on the neighbourhood, quality of finishings, and the size of the property. A property on Eagle Mountain may demand double the monthly rents compared to a house in Central Abbotsford and vice versa.