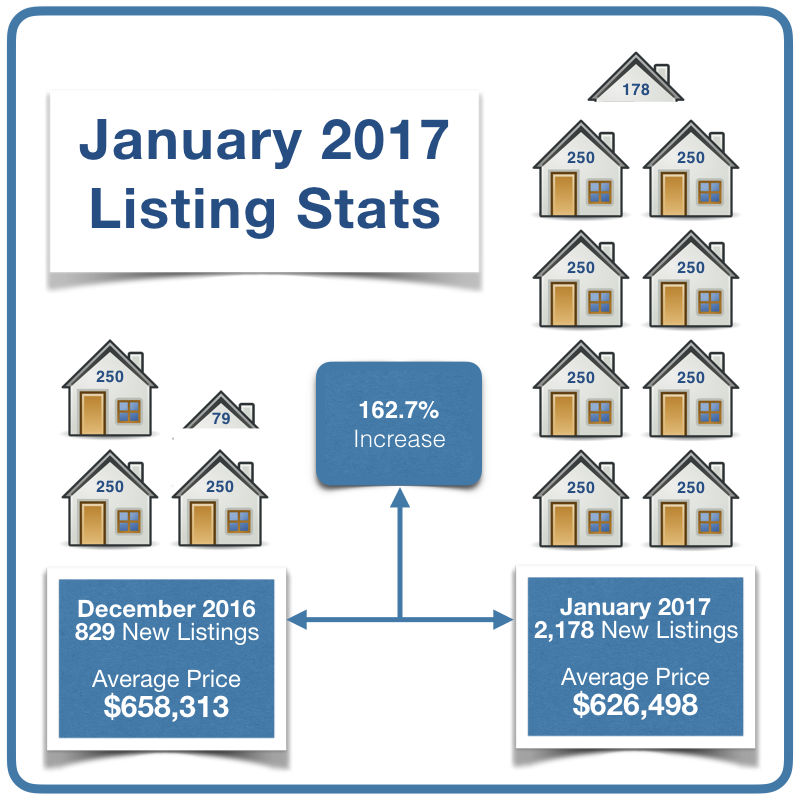 It’s a very strong start to the new year with 2,178 new real estate listings received by the Fraser Valley Real Estate Board, a 162.7% increase over December of 2016.

This leap brought the active inventory level of real estate in the Fraser Valley to 4,401 listings, which is actually a decrease of 8.1% year-over-year, and one of the lowest January levels for the past 10 years.

In terms of sales in January, townhouses and apartments/condos made up exactly half of the market activity, with 276 apartments and 212 townhouse sales.

There were still a sound number of new houses added to the market as well in January 2017, and sales exceeded the ten year average for the same month. Even though sales realized a 27.1% decrease compared to January of last year, there was a 1% increase over December of 2016.

However, the month-over-month increase of active inventory was 12% compared to the 3,930 listings active in December of 2016. It took almost 49 days to sell a single detached family home in January 2017, while in the same period for January of 2016, it took 33 days.

Here’s a closer look at benchmark prices for property types by city.

According to the British Columbia Real Estate Association in their housing forecast from November of 2016, the Fraser Valley Real Estate Board, in conjunction with 2 other boards which service the Lower Mainland-Southwest area in the province, contributed to over 60% of provincial housing demand last year. Coupled with the 35,000 jobs that were added to the area in 2016, this region of the province continues to post strong market performance.

Is Now The Right Time to Buy or Sell Your Home?

“This is a great time to list in the Fraser Valley; buyers are looking at a wider range of homes and the market is still lacking inventory needed to match demand. If you need help figuring out your next step, talk your local REALTOR® and they can help you get to market quickly and stress-free.”

For home buyers in 2017, Wiebe comments:

“Notably, the distribution of sales across our residential property types leveled-off even further in January. As well, prices continue to adjust to match more typical demand, albeit slowly.”