The Future is Surrey – Concord Pacific Development in Surrey BC

The Future is Surrey – Concord Pacific Development in Surrey BC 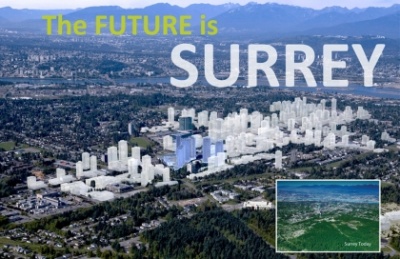 The company’s Vice President Grant Murray shares that they feel it is important to move outside of Vancouver especially with 70% of population growth expected south of the Fraser River. In particular they feel that Surrey has the potential to go very high density. Essentially, they see the profit potential for development in Surrey.

In the article published by Straight.com, Vancouver’s Online Source, Murray is quoted as saying that Surry has “caught everyone’s attention” and it is “growing up a lot faster than anybody anticipated.”

So what does Surrey, BC’s future hold?

You may not know it but Surrey has experienced significant growth and the real estate market it is not about to slow down anytime soon. Consider these Surrey population statistics:

Surrey, BC is on the verge of something great. Murray of Concord Pacific Development Inc. even compared Surrey where it is today to Vancouver’s popular Yaletown of 20 years ago!

Surrey, BC is Open for Business

Speculation by Urban Forum Associate principal Lance Berlowitz is that Concord Pacific sees the potential of Surrey’s demographics and population growth, its SkyTrain and infrastrcuture and Mayor Dianne Watts’ initiatives to rebrand our city as more than just a suburb.

In fact, Mayor Watts is fairly aggressive in bringing in new development and set on making Surrey a viable and desirable alternative to downtown Vancouver.

As we see Surrey become a new urban city in British Columbia we will see the commercial and residential real estate market continue to prosper. For example, in March we heard Century Group announce the $150 million Three Civic Plaza complex.

We can likely expect Concord Pacific Surrey developments continue to accumulate. After all with its short two decade history in Vancouver Concord Pacific built 55 high-rises in the downtown area with plans for an additional 15 more. So keep your ears tuned for more updates on Concord Pacific’s involvement in our beautiful city.

To speak with me about any of your real estate questions please contact me by phone at 778-316-4290 or by email at Natasha Taylor. I look forward to speaking with you!